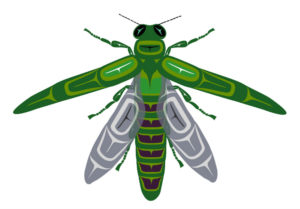 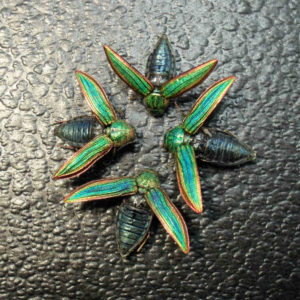 One of the largest groups of insects in the order Coleoptera are Jewel beetles, or Buprestids. The Jewel beetle group is also known as metallic woodborers or flat head borers and are amongst the most visually striking of all beetles. They are a favorite of insect collectors. Iridescence in the exoskeleton is not due to pigments but caused by microscopic surface patterns refracting and reflecting light. As a result, the apparent metallic sheen does not fade and remains as long as the exoskeleton surface remains intact. This property makes these Buprestid beetles popular as jewellery and decoration in some cultures.

Synergy offers a variety of trapping options for buprestid beetles.
We suggest using our new Synergy Semiochemicals Multitrap system in EAB green but can also supply the conventional prism traps.

Most buprestid Jewel beetles are saproxylic, much like cerambycid beetles, and spend part of their lifecycle boring into wood. They usually prefer mature or even senescent tissues. The eggs and larvae develop within the wood and promote degradation and decay processes. When adults emerge they often feed on flowers or leaves. The presence and species diversity of buprestids are indicators of forest health. Ancient forests support many more species than managed woodlots.

With such a large group, there are many jewel beetle species known as pests throughout the world. European species Melanophila acuminate, the fire borer, are specialists seeking out burned and scorched trees, sometimes over great distances. The St. Johnwort Borer, Agrilus hyperici is used as a biocontrol agent, with larvae feeding in the rhizomes and stems of herbaceous perennial weeds.

Both Agrilus sulcicollis, a pest of oak, and Agrilus planipennis, the Emerald ash borer (EAB) have been introduced to North America. EAB originated from Asia and has killed millions of healthy ash trees since its original detection in the Detroit/ Winsor area in 2002. It has now spread throughout central and eastern Canada and much of the north east US.

Synergy Semiochemicals has supplied North American researchers and government agencies such as CFIA and APHIS with traps and lures for one of the main Buprestid pests, Emerald Ash Borer. There has been a major effort by CFIA in Canada and APHIS in the US to delimit the spread of EAB using traps and lures. Bupresids have acute color vision and EAB traps make use of the fact that EAB responds to both green and purple traps along with several lure types including leaf alcohol, manuka oil and the beetle produced pheromone, lactone.

Our own research has shown Bruprestis lyrata is attracted to verbenone which demonstrates jewel beetles using chemical cues to recognize the health and vigor of potential hosts.